Eight channels video projection installation, “Karma”, based on the story of the classic Mascaron -Caryatids. This is a familiar form of traditional architecture in Europe, used widely as a type of ornament or columns. Interestingly, most of the Mascarons statuary are posed holding eaves – female figures holding up the burden. Most of the caryatids have been holding this burden for more than hundreds of years. Artist felt that these sculptures possessed a character and identity that was timely, as if they were saying to the viewer “it shouldn’t be such a burden.”

For “Karma”, Jang invites “viewers” to a new form of installation.

The composition of the work is drawing as eight channels that divided from one channel and these moving images installed as an expanding form on several walls or whole spaces. To be specific, in previous work, “Moving Sculpture” was normally drawn on one sight with one channel or several channels which also played on one sight. Whereas, “Karma” played north and south side of the space. As so, “Karma” is designed for showing on every eight different columns with eight different Mascarons in the Sculpture Court of Edinburgh College of Art, The University of Edinburgh. By dividing channels and spaces, it brought about various impacts.

“Karma” reflected the possibility of the media-facade show.  By diving channel, the work can use more spaces, and it brings about an effecting as media-facade. Also, One of the merits of media art is that a moving image can be applied to other venues. Although ”Karma” has designed for the Sculpture Court of ECA, it can be transformed into any other formats for any other venues such as gallery or museum spaces by directly editing form. 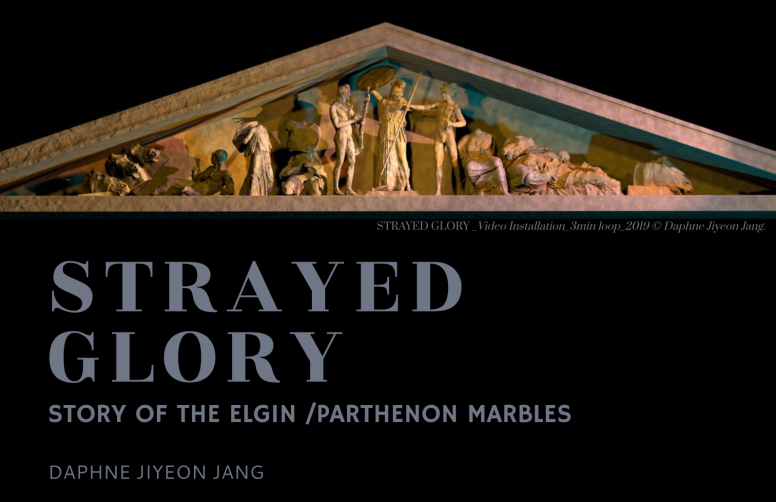